First of May demonstration in Vienna

Over 1000 people joined the internationalist demonstration to the first of May in Vienna. We estimate the participation as well as the spirit of the demonstration as good, especially our activists and sympathizers, which tried with powerful slogans to give the demonstration more drive.

Also our paroles to the international fighting day of working class this year, “trust in your own force” and “learn how to fight in your own way”, got popularized and were very important to us, to develop our own forces. The mobilization for the demonstration war also very good and was not just made in Vienna, but also in Burgenland.

It was very important to us, that we could win new forces for the first of May this year, and that we also managed it to get old forces active again. We will use this to start in the following weeks a campaign for the active boycott of elections in Austria in the end of May. There was also much interest to our flyers and information-material, which led to good discussions.

This first of May was a very important day to us to concentrate our own forces, as well as to develop important ideological debates. This is why we supported the spreading of the material of the campaign “Fight against the current. 50 years culture revolution. 40 years death of chairman Mao.”, which gave the impulse to popularize the achievements of the communist world movement and its highest point, the Great Proletarian Culture Revolution, as well as the highest step of proletarian ideology, Maoism. Ongoing we will support this campaign and spread the material.

With first of May 2016 we managed to build a good basis for learning better how to fight in our own way in the coming year of struggle! 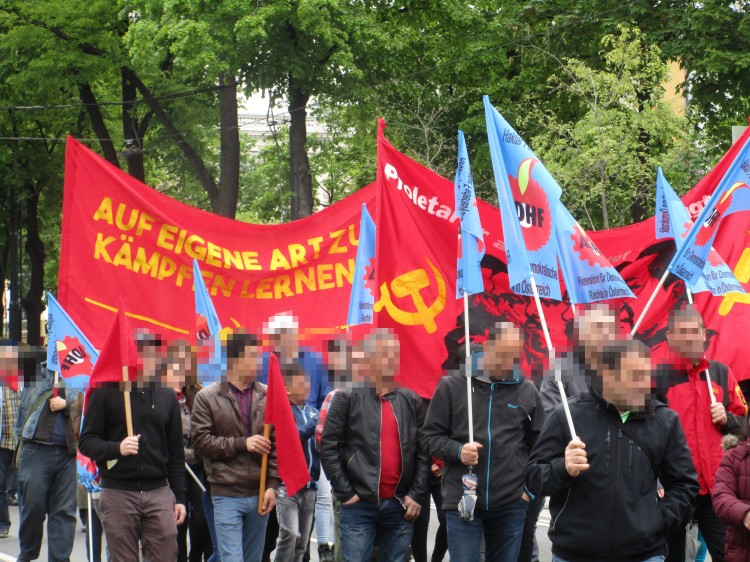 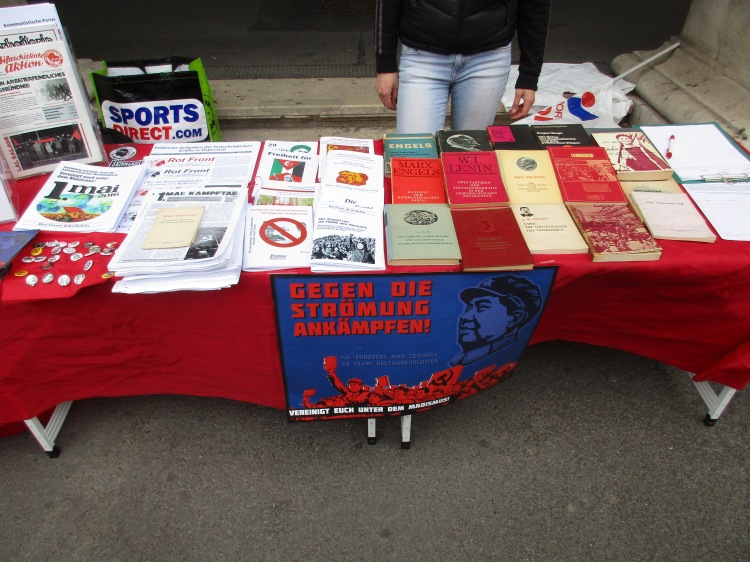 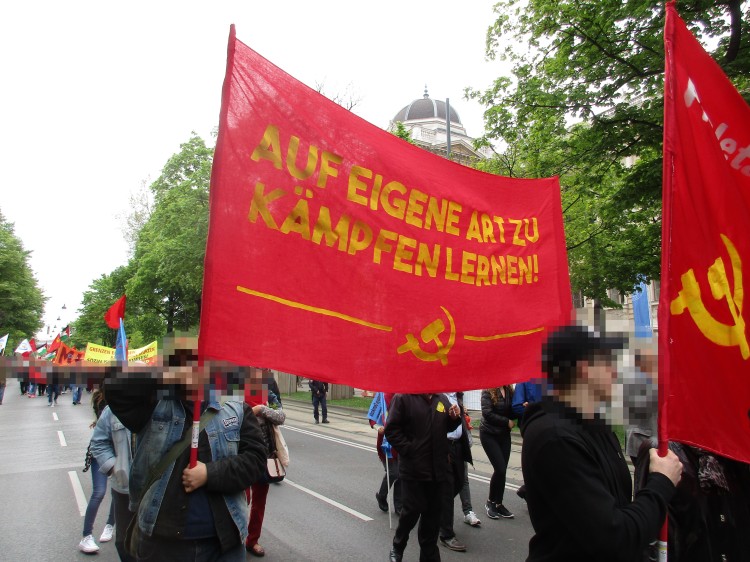 First of May – Linz

This year on 1th of May in Linz, 300 people joined the internationalist may demonstration. It was bigger than last year and especially the maoist block managed to grew. We demonstrated with the slogans: „Workers of all countries, unite!“ and „Learn how to fight in your own way!“

When you look at SPÖ (Social Democratic Party) and the revisionists, you see how important these slogans are. Because the SPÖ turned the international fighting day of the working-class into a parade of their functionaries and trainees who were committed to join the march. On the other hand forces like KPÖ (Communist Party of Austria) and SLP (Socialist Left Party) used the day to focus on parliamentarism and therefore on the upcoming election of the president and against the right wing candidate Hofer. Those ways don’t give the working-class answers and perspectives, but serves for there own interests and the ruling class.

For the internationalist demonstration our activists managed to spread a militant atmosphere – many people start to participate on our slogans. Mainly a slogan about unemployment and forced labour was strongly taken by the workers youth and migrant women. A slogan for the red youth was taken enthused too. It was also only our activists who took up position for revolution and communism due to slogans.

Already by doing the mobilisation we saw that our slogans „Learn how to fight in your own way!“  and „Trust in your own force!“ had good response inside the masses. With that paroles we organised new people under the banner of Maoism. That makes first may in Linz a successful day of struggle and created a good basis for the next year of struggle! 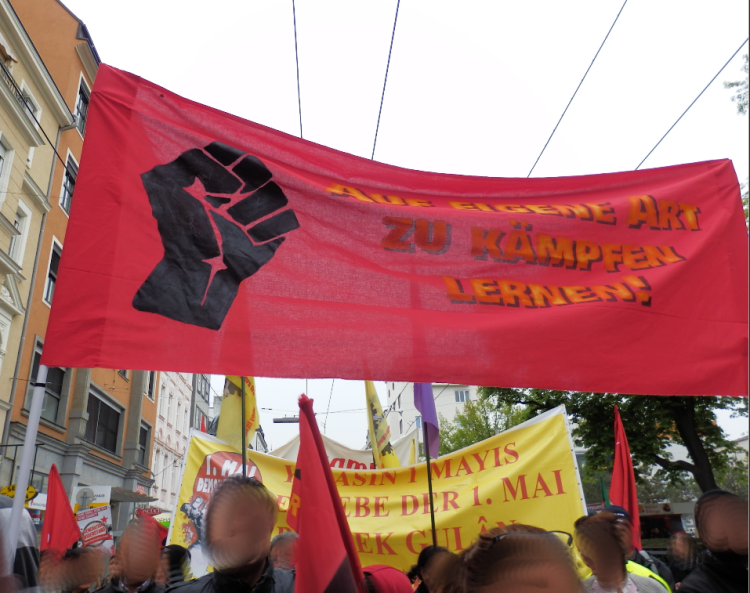 On the 1.May-Demonstration in Innsbruck participated around 750 people, also acitivists and sympathisants of the RA. We also made agitation for this important day before with flyers and discussion. We discussed the historical meaning of the international day of working class struggle and our tasks today in Innsbruck.

In some parts of demonstration the people shouted loudly their demands, against fascism, imperialism, freedom for political prisoners (especially for ATIK-acitvists) and so on. Despite rain and cold weather it was good to see, that various parts from the masses participated at the demonstration – organised people, not oganised, workers, students, children….

Our slogans for this demonstration showed our most important tasks today international and for Austria. First time in Innsbruck we participated under the banner of maoism, which shows the international ideologie of the proletariat. We also took up the important parole „learn how to fight in our own way“. This was also seen in the demonstration , where we shouted based on our own force and brought a coorect line into the masses. Also good was a big interest on our material: newspapers and flyers. It showed that parts of the poeple wants to discuss about qutestions of ideology, struggle, election-boykott etc.. This is a very good sign and the first step to unity threw ideological struggle.

What was difficult for us, was to gather our forces together, because our people was placed on different parts of the demonstration. It made it hard to shout together the same parols and to keep on shouting until the end. Next time we have to make this more consequent.

The highligt on this day was for us the propaganda-action we made after the Demonstration. It made our forces stronger and brought them together. Also it was a good exercise for actions like this, to make it planned and ordered. Pictrues are at the end!

The international day of working class struggle is a very important day for us. It’s the end of one year of struggle and the beginning of the next. We look at the last year and summerize our experiences, the mistakes and good things and go with motivation into the next year. 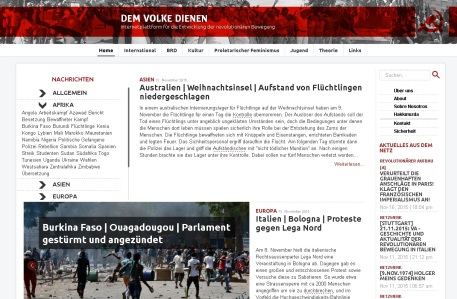